There is no getting away from it; the question, “What is truth? or What is the truth?” never goes away if one insists on keeping one’s mind open to “the elements of existentialism” for existence is truth but how many faces does it have? How many names? What aspects do I place upon my own existence, my place in what I used to think of as space and time and which now encompasses infinity and eternity?

The following is a quote from “Lord of Light” by Roger Zelazny. He talks about the importance of words and truth. Coincidentally I was also reading from Charles deLint today and first, here’s a short quote from a short story titled, “Birds.”

“When her head is full of birds, anything is possible. She can understand the slow language of trees, the song of running water, the whispering gossip of the wind. The conversation of the birds fills her until she doesn’t even think to remember what it was like before she could understand them. But sooner or later, the birds go away, one by one, find new nests, new places to fly. It’s not that they tire of her; it’s simply not in their nature to tarry for too long.

But she misses them. Misses their company, the flutter of wings inside her head and their trilling conversations. Misses the possibilities. The magic.

“Names are not important,” he said. “To speak is to name names, but to speak is not important. A thing happens once that has never happened before. Seeing it, a man looks upon reality. He cannot tell others what he has seen. Others wish to know, however, so they question him saying, ‘What is it like, this thing you have seen?’ So he tries to tell them. Perhaps he has seen the very first fire in the world. He tells them, ‘It is red, like a poppy, but through it dance other colors. It has no form, like water, flowing everywhere. It is warm, like the sun of summer, only warmer. It exists for a time upon a piece of wood, and then the wood is gone, as though it were eaten, leaving behind that which is black and can be sifted like sand. When the wood is gone, it too is gone.’ Therefore, the hearers must think reality is like a poppy, like water, like the sun, like that which eats and excretes. They think it is like to anything that they are told it is like by the man who has known it. But they have not looked upon fire. They cannot really know it. They can only know of it. But fire comes again into the world, many times. More men look upon fire. After a time, fire is as common as grass and clouds and the air they breathe. They see that, while it is like a poppy, it is not a poppy, while it is like water, it is not water, while it is like the sun, it is not the sun, and while it is like that which eats and passes wastes, it is not that which eats and passes wastes, but something different from each of these apart or all of these together. So they look upon this new thing and they make a new word to call it. They call it ‘fire.’

“If they come upon one who still has not seen it and they speak to him of fire, he does not know what they mean. So they, in turn, fall back upon telling him what fire is like. As they do so, they know from their own experience that what they are telling him is not the truth, but only a part of it. They know that this man will never know reality from their words, though all the words in the world are theirs to use. He must look upon the fire, smell of it, warm his hands by it, stare into its heart, or remain forever ignorant. Therefore, ‘fire’ does not matter, ‘earth’ and ‘air’ and ‘water’ do not matter. ‘I’ do not matter. No word matters. But man forgets reality and remembers words. The more words he remembers, the cleverer do his fellows esteem him. He looks upon the great transformations of the world, but he does not see them as they were seen when man looked upon reality for the first time. Their names come to his lips and he smiles as he tastes them, thinking he knows them in the naming. The thing that has never happened before is still happening. It is still a miracle. The great burning blossom squats, flowing, upon the limb of the world, excreting the ash of the world, and being none of these things I have named and at the same time all of them, and this is reality—the Nameless.

“Therefore, I charge you—forget the names you bear, forget the words I speak as soon as they are uttered. Look, rather, upon the Nameless within yourselves, which arises as I address it. It hearkens not to my words, but to the reality within me, of which it is part. This is the atman, which hears me rather than my words. All else is unreal. To define is to lose. The essence of all things is the Nameless. The Nameless is unknowable, mightier even than Brahma. Things pass, but the essence remains. You sit, therefore, in the midst of a dream.” (from Lord of Light, by Roger Zelazny)

We live in a fractured reality we cobble from dreams we were forced to dream using the terribly inadequate and confusing tools of words of many meanings from languages we dragged off with us from the Babel diaspora – well, that’s one way to put it. The writer is right though, we have become addicted to words and even the new words we now use are just twistings of the old ones. Lazy abbreviations that litter and pollute the cell phone and web world. Increasingly meaningless tripe oozing from lazy and dying brains. OMG! LOL! WTF, R U there?…

It was claimed once upon a time that a picture is worth a thousand words. If we look at the internet clogged with discordant images, at TV, at bill boards and book covers we know that to be a lie. Book covers hardly ever depict what’s between the pages. The rest is chaos in spades, overload of colors and shapes that become essentially mirages blending into each other until one word describes the entire imagery: meaninglessness, that describing much of modern existence. 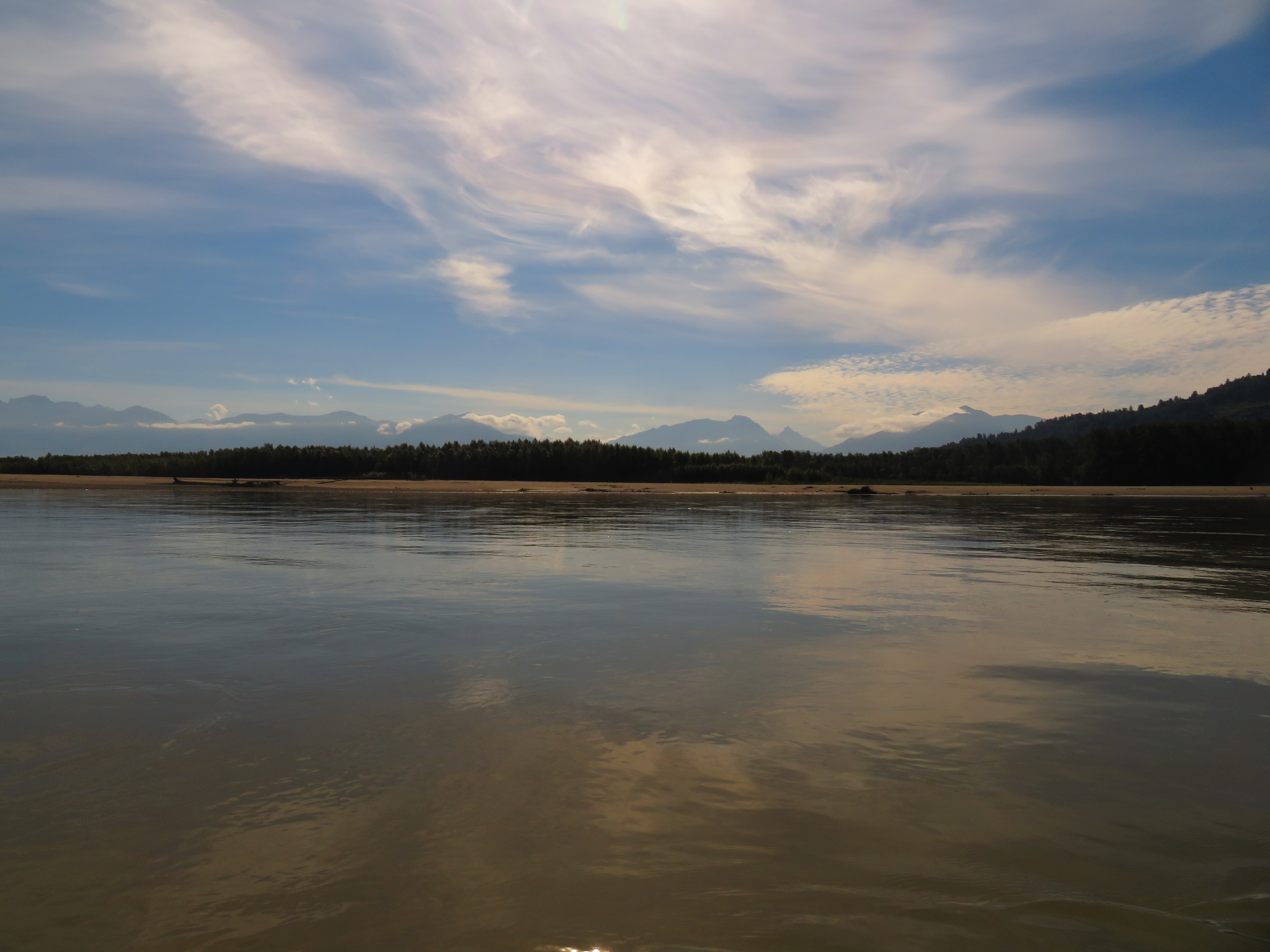 The River has many Moods – image by Sha’Tara, September, 2020